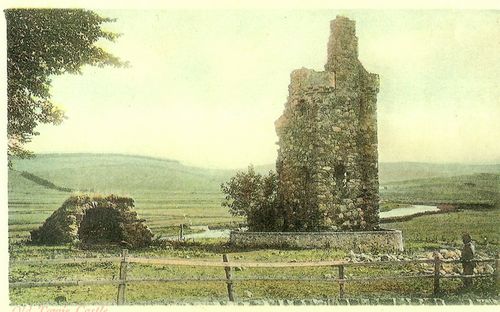 Towie Castle was a 17th century tower house near Kildrummy, Aberdeenshire, and once a stronghold of Clan Forbes. A previous castle on the site may have been burnt in 1571 by Adam Gordon of Auchindoun (1545–1580), brother of the Earl of Huntly and a supporter of Mary Queen of Scots, which resulted in the deaths of Lady Forbes, her children, and others, numbering thirty-seven in all. The castle was rebuilt in 1618 as a three-story L-shaped tower house, altered in 1788 when the towers and battlements were destroyed and dismantled, but later abandoned and allowed to fall into ruin. By the mid-19th century is was completely in ruins and uninhabited. It was finally completely demolished in the 20th century as it was deemed unsafe.

Towie Castle, the seat of Alexander Forbes, a very prominent gentleman of the clan, became specially obnoxious to [Adam Gordon], and, in November, 1571, he sent Captain Ker, with a small body of troops, to summon it in the Queen's name. Its owner was at the time absent; and his lady, whose maiden name was Margaret Campbell, and who was pregnant, and confided too much in her sex and condition, and at the same time had a strong mixture of the virago and the Amazon in her character, not only refused to surrender, but poured on him a torrent of abusive language, and took a deliberate aim at him from the battlement with a musket or other similar weapon, and fired at him. Her shot wounded his knee, and perhaps her works still more wounded his mind; and, in a transport of rage, he ordered his men to set fire to the castle; and so fatal was the result that the lady and her children and all the inmates, amounting altogether thirty-seven persons, perished in the flames. Sir Adam Gordon never took Ker to task for this horrible atrocity, and was therefore held in public opinion to be personally accountable for it...

As a respected employee of the Forbes family, Walker would have been cognizant of the family history, including this tragedy.