Find traditional instrumental music
This is the stable version, checked on 22 November 2021.
Jump to: navigation, search

Back to Air Balloon (The)

AIR BALLOON, THE. English, Country Dance Tune (cut time). A Major. Standard tuning (fiddle). AABB. The melody probably refers to the hot-air balloon ascent of Italian balloonist Vincenzo Lunardi (Vincent Lunardi) in September 1784, watched by a crowd of some 150,000, including the Prince of Wales (later George IV). Lunardi's was not the first ascent, for there were balloon flights in France in 1783, and, a month previously, in Edinburgh by James Tytler. Lunardi's was the first in English skies, however, and he caused a sensation when he took off accompanied by a cat, a dog and a pigeon. 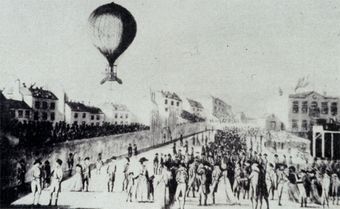 Lunardi takes off from the grounds of the Honourable Artillery Company in East London on the 15 September 1784.

Lunardi was feted by the city after his feat, and was made an honorary member of the Honourable Artillery Company. King George III granted him a special audience and he was presented with a watch by the Prince of Wales. His balloon became an attraction when exhibited at the Pantheon, a London theater. Unfortunately, Lunardi was unable to translate his fame into lasting success, and he died twelve years later in poverty in a monastery in Portugal.

Back to Air Balloon (The)