Find traditional instrumental music
This is the stable version, checked on 23 March 2021.
Jump to: navigation, search

Back to Black Crook Jig 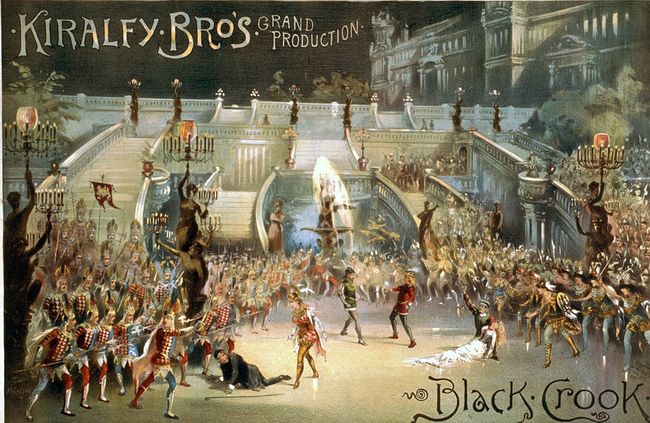 The finale of The Black Crook (1866)
BLACK CROOK JIG (2/4 time). American, Reel (2/4 time). E Major. Standard tuning (fiddle). AA'BB. The enormously popular and financially lucrative stage extravaganza The Black Crook (1866) is said to have been the genesis of musical theatre in America, although it merely appropriated and packaged concepts around at the time in order to titillate and entertain. The five-and-a-half hour melodrama had music (mostly adapted) by Thomas Baker and, in America, was performed at Niblo's Gardens in New York City. It included elements of melodrama and fantasy (inspired in part by Carl Maria von Weber’s opera Der Freischütz and Goethe’s Faust), ballet (performed by a troupe of 100 French female dancers, in skin-colored tights), spectacular scenery and costumes and transformation scenes made possible by sophisticated stage machinery. The play became astonishingly popular, achieving a run of 474 performances over the course of sixteen months and remained a mainstay of the American theatre until almost the end of the nineteenth century. In addition to the music written by Baker for the original production, there were many additional compositions written for interpolation later.

The Black Crook became, during its months as a Broadway phenomenon, the butt of burlesque in virtually every minstrel and burlesque troupe in town. Christy’s Minstrels, the San Francisco Minstrels, Kelly and Leon (The Great Black Crook Burlesque) all featured parodies of the show, Tony Pastor offered John F Poole’s The White Crook and visiting British actor Edward Warden penned a Black Cook which went round the country.

Back to Black Crook Jig