Back to City of Savannah[edit]

CITY OF SAVANNAH. American (originally), Irish; Hornpipe. D Major. Standard tuning (tuning). AABB. Composition credited to Frank Livingston in Ryan's Mammoth Collection (1883). The title may refer to the sail steamer City of Savannah, the flagship of the Ocean Steamship Company of Savannah, built in 1877. For seventy years, from 1872 to 1942, the company operated vessels that carried passengers and freight between Savannah, New York and Boston. There were other 'city' ships in the 19th century: the City of New York was built in 1888 for the Inman Line. Sister ships the City of Paris and the City of Brooklyn plied the waves beginning in the 1860's. All were award winning ships that set crossing records for their era. In August, 1893, on a return voyage from Boston to Savannah, the City of Savannah foundered off the coast of South Carolina in a hurricane. 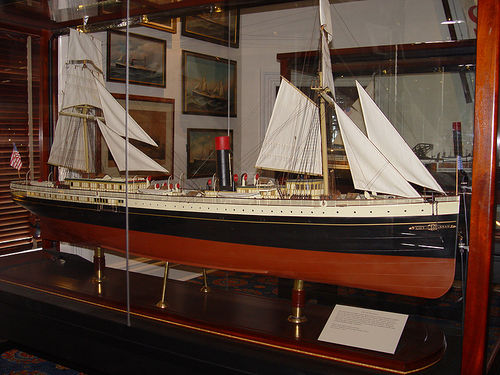 A model of the City of Savannah, Ships of the Sea Maritime Museum, Savannah, Georgia.

Back to City of Savannah[edit]