Back to Comical Fellow

COMICAL FELLOW, THE. English, Country Dance Tune (6/8 time). D Major. Standard tuning. AABB (Johnson, Raven): AAAABB (Barnes). The tune first appears in Charles and Samuel Thompson's 24 Country Dances for the Year 1776, reprinted in their Compleat Collection of 200 Favourite Country Dances, vol. 4 (London, 1780), and soon after published by Longman and Broderip's in their Compleat Collection of 200 Favorite Country Dances (London, 1781). American manuscript versions can be found in the collections of Jeremiah Brown (1782, Seabrook, N.H.) and Luther Kingsley (1795, Mansfield, Conn.), and it was published in 1805 in Joshua Cushing's Fifer's Companion (Salem, Mass.).

Researcher Graham Christian (2015) finds the country dance tune to be a version of the air for the catch (part song) "The Comical Fellows," by William Bates (1730-1790), a friend of English composer Thomas Arne [1], with whom he sometimes collaborated. Little is know about Bates, save that he composed music for several dramatic pieces, including The Jovial Crew (1760), several songs sung at Marleybone Gardens (a London pleasure garden) in 1768, and a musical prelude called "The Theatrical Candidates" (1775), as well as miscelaneous cannons, catches and glees. He is supposed to have been connected with the London theater, and was the music master for "the eccentric vocalist and famous beauty of her time, Ann Cattley." Bates's song "The Comical Fellows," or "Sir you are a comical fellow" (from the first line) was a pience that won the annual prize at the Noblemen and Gentlemen's Catch Club, an amateur singing society founded in 1761. The prize was coveted and brought him some renown. As Christian (2015) notes, "So well-known was this trifle that caricaturist Robert Dighton (1754-1812) depicted it as the song of choice in his merciless satire on the well-born amateurs of the Catch Club, fifteen years later." The first stanza goes: 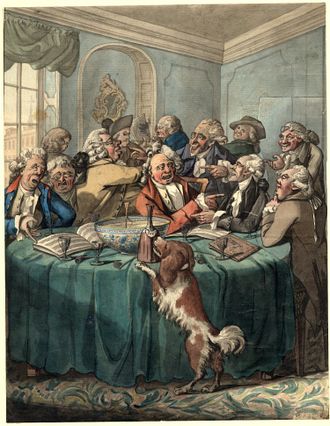 Back to Comical Fellow