Countess of Crawford (The)

Back to Countess of Crawford (The)[edit]

COUNTESS OF CRAWFORD, THE. AKA and see "Dunecht House." Scottish, Slow Strathspey or Air. A Major. Standard tuning (fiddle). AB. One of the most famous compositions of Peter Milne (1824–1908), a Scottish fiddler, one of J. Scott Skinner's teachers and, later, fiddling partner. Milne was renowned for his ability to improvise numerous variation sets as he played. He managed to make a living playing theater venues all over Scotland, but became addicted to opium in the drug laudenaum, which he originally took as a pain-killer following an accident that left him debilitated. Milne ended his life in reduced circumstances, busking on the ferry which crossed the Firth of Forth until the Forth Bridge was built in 1908. He died in an insane asylum. The "Countess of Crawford" is considered to be among those of Milne's better compositions. See also Milne's companion reel, "Earl of Crawford (The)." 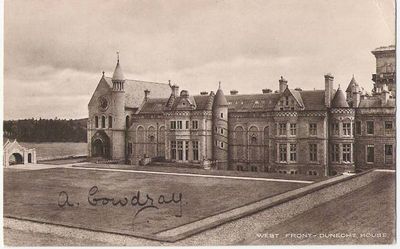 Dunecht House is a mansion that was constructed in 1820 as the seat of Earl of Crawford and Balcarres. It features a grand ballroom, chapel and observatory and is surrounded by extensive gardens. The observatory was added by James Ludovic Lindsay (1847–1913), the 26th Earl of Crawford, a politician and amateur astronomer.

Back to Countess of Crawford (The)[edit]