Back to Hobb's Wedding 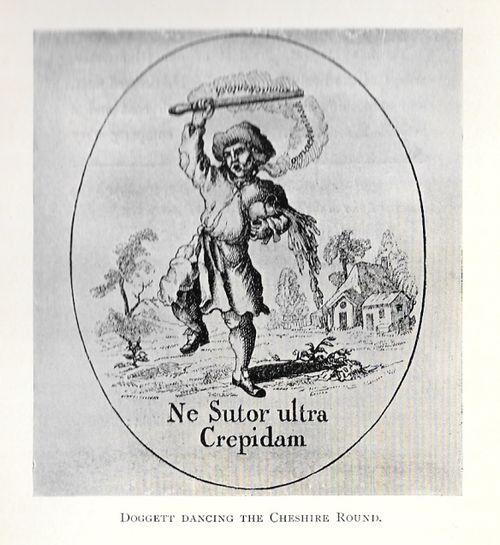 The only known portrait of Thomas Doggett, dancing a Cheshire Round.
HOBB'S WEDDING: A KISSING DANCE IN THE COUNTRY WAKE. English, Country Dance Tune and Jig (6/4 or 6/8 time). C Major. Standard tuning (fiddle). AABB. The melody with directions first appears in Henry Playford's Dancing Master, Part II, in the supplement to the 9th edition (1696, No. 16). It was retained in the long-running Dancing Master series through the 18th and final edition of 1728, published at the time by John Young, heir to the Playford publishing concerns. "Hobb's Wedding" was also printed by rival London music publisher John Walsh in his Compleat Country Dancing Master, editions of 1718 and 1731.

The Country Wake(1696) was a comedy whose main character, Hob, was played by actor and playwright Thomas Doggett, who also wrote the play. It wasstaged at London's Lincoln's Inn Fields Theatre and later revived by Cibber in 1711. Dogget bequeathed an annual coat and badge to the watermen of the Thames. Irish-born John Leigh wrote a farce that was the sequel to Doggett's work, called Hobb's Wedding (1721), also staged at Lincoln-Inn-Fields Theatre. Dogget, who was born in Ireland as well, died the same year. Leigh's play was not a success.

Back to Hobb's Wedding