KILLAGHBEG HOUSE. AKA and see "Ah Surely (1)," "Bearna na Gaoithe," "Bonfire (2) (The)," "Boys of the Twenty-Five (2)," "Windy Gap (1) (The)," "Killabegs House," "Killybegs Reel," "Rose in the Garden (3)," "Up Cloontia." Irish, Reel. G Major. Standard tuning (fiddle). AABB. The title, correctly spelled "Killaghbeg House," was the family dwelling of Paddy Fahy in east Galway, famous for its music sessions, and one of the practice locations for the Ballinakill Ceili Band. Not to be confused with the fishing port of Killybegs in Donegal. David Taylor (1992) believes the original title of the tune is "The Bonfire," and states there is evidence that the tune pre-dates the "golden era" of Irish music from 1920 - 1940, when many popular Irish tunes were composed. Breathnach prints the tune in Irish Folk Dance Music (185) as "Killabeg's House," from the playing of accordionist Sonny Brogan.

Killaghbeg House is a country house in County Galway, the home of gentleman farmer and musician Jack Fahey. Fahey acted as mentor to the trio of Jack Mulkere (fiddle), Paddy Kelly of Aughrim (fiddle) and Joe Mills of Ballinasloe (accordion), who formed the Aughrim Slopes Trio around 1927, and who rehearsed regularly at Killaghbeg House. 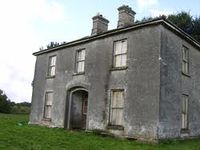 
Recorded sources: Shaskeen - "The Mouse Behind the Dresser."