Lamentation of Deirdre for the Sons of Usneach

Find traditional instrumental music
This is the stable version, checked on 17 November 2019.
Jump to: navigation, search

Back to Lamentation of Deirdre for the Sons of Usneach

LAMENTATION OF DEIRDRE FOR/OVER THE SONS OF USNEACH. AKA and see "Deirdre's Farewell to Scotland," "Deirdre's Lament for the Sons of Usneach, "Fada an la Gan Clann Uisneach (1)." Irish, Slow Air (3/4 time). G Major. Standard tuning (fiddle). One part. Edward Bunting classified this tune as "very ancient," by which he meant pre-Christian, and associated it with Fenian cycle of bardic tradition. The late Derek Bell, Chieftains harper, considered the tune to be the "oldest extant piece of Irish music." 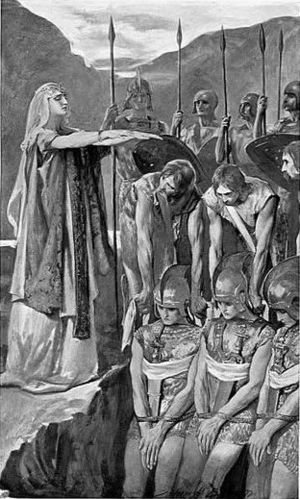 The story of Deirdre [1] and the sons of Usneach (sometimes Uisneach) is an ancient Irish love tragedy. Deirdre was the daughter of Felimid, and when she was born the druid Cathbad made a prophecy that she would grow to be very beautiful, but would bring great sorrow and suffering the the people of Ireland. Promised to King Conor Mac Nessa, she was reared apart from men until she became of age and could be taken to wife, but her upbringing was happy enough, with every luxury she could want afforded her. By chance, however, she one day met Naoise, son of Usneach and a warrior in the king's army, and the two fell instantly in love. They resolved to elope, and, in the company of Naoise's brothers, they fled, hotly pursued by the vengeful king's warriors. A great battle was fought leaving hundreds of warriors dead, but they continued on still pursued. Finally, the lovers were hounded out of Ireland and were forced to take refuge in Scotland. There was no peace for them there, however, for the King of Scotland had heard of Deirdre's beauty and resolved to have her for himself, and the sons of Usneach fought yet another battle. In the aftermath, they were driven out of Scotland and returned to Ireland. Conor Mac Nessa pretended peace and invited Deirdre and Naoise to a feast, but the king treacherously slew Naoise and forced Deirdre to submit to him. Her grief was enormous, her cries pitiful, and such was her pain that she resolved to be reunited with Naoise-she dashed her head against a rock, destroying her beauty as well as her life.

Words to St. Patrick's Lorica were set to this tune, resulting in the hymn called "St. Patrick's Breastplate." Petrie (1855) notes that his version was "Set in Mayo." Belfast collection Edward Bunting (1773-1843) in 1840 wrote that "Lamenation of Deirdre for the sons of Usneach" was still sung in various parts of the country. Bunting had his set from a native of Murlough, near Ballycastle, County Antrim. “It is worthy of remark, that the same air and words are sung by natives of Scotland. A blind woman from Cantyre gave the identical notes in singing the piece at Belfast about forty years ago” [Ancient Irish Music, 1840, Preface, p. 7]. See also note for "Deirdre's Lament for the Sons of Usneach" for more.

Back to Lamentation of Deirdre for the Sons of Usneach