Lassie Lost her Silken Snood (1) (The)

Find traditional instrumental music
This is the stable version, checked on 21 February 2022.
Jump to: navigation, search

Back to Lassie Lost her Silken Snood (1) (The)

LASSIE LOST HER SILKEN SNOOD [1], THE. AKA and see "Twine weel the Plaiden." Scottish, Air (whole time). E Flat Major. Standard tuning (fiddle). AABB. The title is a line from a song which usually goes by the title "Twine weel the Plaiden." James Oswald published a triple-time tune by the "...Silken Snood" title (in 3/4 and an appended jig) in his Caledonian Pocket Companion Book 12 (1760, p. 22). However, the air of "Lassie lost her silken snood" as printed by the Gows in Edinburgh in 1800 is that of "Twine weel the Plaiden" as it appears in the first volume of James Johnson's Scots Musical Museum (1787). The melody for the The words to 'Museum' version is said to have been taken directly from 'Calliope or The Musical Miscellany, published in Perth, 1786. William Stenhouse, in his remarks on the song in his mid-19th century edition of the Museum claimed to have heard "an old lady who sang these verses to a very plaintive and simple air, in slow treble time, a copy of which, but much corrupted with embellishment appears in Oswald's Collecton, No. 12." John Glen (1900) points out that there is no way to verify this claim as Stenhouse did not include the woman's melody in his writing for comparison.

The words to the song, as printed in the Museum, begin:

According to Ebenezer Brewer's Dictionary of Phrase and Fable (1894) the 'snood' was a ribbon with which Scottish girls braided their hair, emblematic of their maiden character. When she married she substituted a curch or coif for the snood, "but if she lost the name of virgin before she became a wife, she 'lost her silken snood', and was not privileged to assume the curch." Snood - from the Anglo-Saxon snod. Archibald Bell, who printed "The Lassie's Lost Her Silken Snood" in his Scottish Melodies (1849, p. 97), opined: "This air appears to the Author to possess much beauty, delicacy and expression." 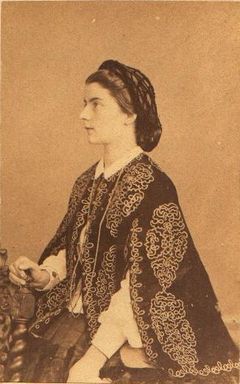 O I hae lost my silken snood,
That tied my hair sae yellow;
I gied it tae the lad I lo'ed,
He was a gallant fellow.

Back to Lassie Lost her Silken Snood (1) (The)