Lord Frederick and His Fencibles

Back to Lord Frederick and His Fencibles[edit]

LORD FREDERICK AND HIS FENCIBLES. Scottish, Reel (cut time). B Flat Major. Standard tuning (fiddle). AAB. John Glen (1891) finds the earliest appearance of this tune in print in Joshua Campbell's 1778 collection (p. 51). By the third year of the American War of Independence, British troops had become stretched thin, and the Government ordered Fencible regiments to be raised for homeland defense, thus relieving regular army units for duty overseas. One of the first such Fencible corps was that honored by the title of Campbell's tune, raised by Lord Frederick Campbell [1] in Glasgow in April, 1778. Most of the recruits came from Argyleshire and other parts of the western Highlands; the rest were recruited in Glasgow and the south-west of Scotland. Campbell (the son of the Duke of Argyll) was the units Colonel and commander, while Sir James Campbell of Ardkinglas was appointed lieutenant-colonel, and Hugh Montgomery of Coilsfield, afterwards Earl of Eglintoun, Major. The regiment was disbanded in 1783. 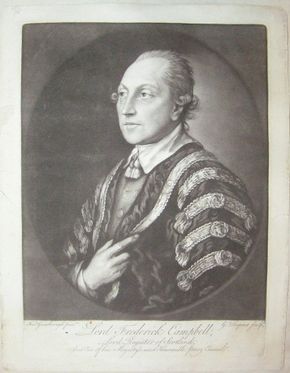 Back to Lord Frederick and His Fencibles[edit]