Back to Lord MacDonald's Highlanders[edit] 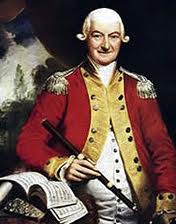 LORD MACDONALD'S HIGHLANDERS. AKA - "March for the 76th Regiment Lord Macdonald's Highlanders," "March of Lord McDonald's Highlanders." Scottish, March (4/4 time). D Major. Standard tuning (fiddle). AB. The march appears in John Reid's A Set of Marches for two clarinets, hautboys, or German flutes, two horns & a bassoon, published by Robert Bremner in 1778 in London. It later appeared in Timothy Olmstead's Martial Music (Albany, 1807), without the horn parts. Olmstead was a Connecticut psalmodist and composer who also served as both as a fifer and as a member of a Connecticut regimental band of music, and his volume of martial music may represent music he was familiar with during his service in the American Revolution (Raoul Camus believes it includes both American and British pieces).

The march was composed by John Reid [1] for the 76th Regiment of Foot (MacDonald's Highlanders) raised by Colonel John MacDonell of Lochgarry, in the West of Scotland and Western Isles, as a Scottish Light Infantry regiment. Reid, son of Baron Reid of Straloch, ultimately rose to become a general, and began his martial career as an officer who fought the Jacobites and who later served in France. He subsequently turned up in North America with the Black Watch in 1755 and took part in the capture of Montreal. In addition to his military prowess, Reid was also an accomplished and sensitive player on the German flute and a composer of merit. When he died, the General directed his fortune (amounting to about £70,000) to be used to endow a chair of music, and other purposes, in the University of Edinburgh.

Back to Lord MacDonald's Highlanders[edit]