Back to Lotus Club (The)[edit]

LOTUS CLUB (Lancashire) CLOG. American, Clog. F Major. Standard tuning (fiddle). AABB. The title may refer to New York City's Lotos Club [1], one of whose founders was Irish actor, editor and playwright John Brougham [2] (1814-1880), who was, for a time, its president. The club is one of the oldest literary clubs in the United States, founded on March 15, 1870, and takes its name from Alfred Lord Tennyson's poem "The Lotos Eaters." Mark Twain was a lifelong member and frequent guest. 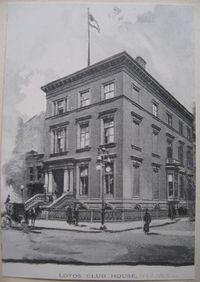 Back to Lotus Club (The)[edit]