Back to Madam Heinel's Fancy

MADAM HEINEL'S FANCY. English, Country Dance Tune (2/4 time). G Major. Standard tuning (fiddle). AABB. Skillern printed a "Madam Heinel's Gavot" (an unrelated tune) in Skillern's Compleat Collection of Two Hundred & Four Reels...Country Dances (London, 1780). Anne-Frédérique Heinel (1753-1808) was a favorite dancer on the London stage in the latter decades of the 18th century, having debuted in Paris at the age of 14 at the Académie Royale de Musique to great acclaim. Burney wrote that her "grace and exection were so perfect as to eclipse all other excellence", while Garrick called her "most amiable" and "a delicious young woman!" She married several times, and had several lovers; finally marrying dancer Gaëtan Vestris in 1792 after obtaining an annulment from her previous union (and eleven months after the birth of her son by Vestris). There is an extended entry on her in Highfill, Burnim & Langhans' Biographical Dictionary of Actors, Actresses, Musicians, Dancers, Managers (1982, p. 241-243). 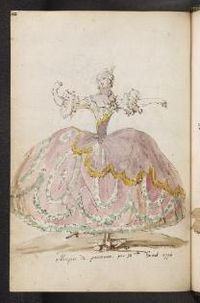 Back to Madam Heinel's Fancy