Marchioness of Townshend (The)

Back to Marchioness of Townshend (The)[edit]

The marriage of John, the 5th Marquess and Lady Anne (Clementina), was unfortunately, a failure. Townshend was a member of the House of Commons, and, when he acceded to the title, the House of Lords. He was known in his time as a "liberal crank", who championed a number of humane causes "far in advance of his time," often for the welfare and protection of the poor. He was not discerning, however, and his bills, while sometimes well considered were at other times thought to be hopeless and even useless. His political reputation a shambles, he determined around 1870 to devote himself to private philanthropy and took up a number of causes, both deserving and non-deserving. Vanity Fair said of him in February of 1870: 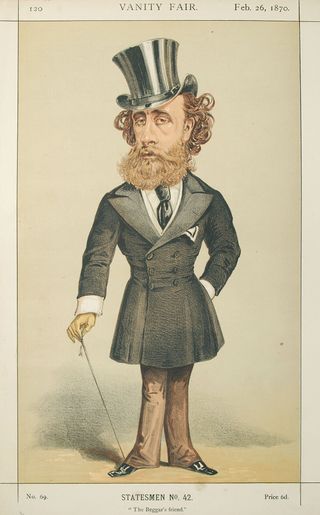 He is the prey of impostors, his generous efforts produce much lasting harm with only a little transient good, he is thwarted and laughed at by glib respectability, but he is a refreshing phenomenon in a selfish age, for he is the Beggar's friend.

All of his activity apparently led him to neglect his home life, and, in 1872 Lord Edward Thynne called upon the Townshend home in London in the Marquis's absence, and absconded with a willing Clementina to France. Townshend was despondent but did nothing until nearly eight years later when the Marquis caught up with Thynne on the road between Salisbury and Laverstock and soundly horsewhipped the miscreant lord. Arrested for the assault, tried and convicted, Townshend pleaded that it was no more than Thynne's just deserts, and while popular opinion sided with him, it was a death-knell for his social standing. The Marquis was forced to pay a fine to avoid prison, and he died at the end of the century with very little to his name, having given away most of his fortune [1].

Back to Marchioness of Townshend (The)[edit]