Back to Miss Hall of Dunglass’ Reel[edit]

MISS HALL OF DUNGLASS’ REEL. Scottish, Reel. B Flat Major. Standard tuning (fiddle). AAB. The melody was composed by Niel Gow Jr. (c 1795-1823), son of Nathaniel Gow (1763-1831) and grandson and namesake of fiddler-composer Niel Gow (1727-1807). Niel Jr. was a promising composer who had entered his father’s publishing business in Edinburgh. Unfortunately, he died young, the year after the Sixth Collection was issued. 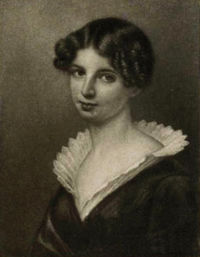 The title refers perhaps to one of the three daughters of Sir James Hall (1761-1832) of Dunglass, 4th Baronet, a Scottish geologist and geophysicist, and his wife Helen Hamilton. Their daughter Eliza was mother of Houston Stewart Chamberlain, a British author who became a German citizen and married composer Richard Wagner's daughter (and in whose writings the Nazi's later found support for their racial views). His daughter Magdalene Hall (1793-1822) married firstly 1815 Colonel Sir William Howe DeLancey, and secondly Captain Henry Harvey; she was author of the poignant A Week at Waterloo [1](first privately published) and died in childbirth with her third child.

Back to Miss Hall of Dunglass’ Reel[edit]