Back to Mr. Colin J. Boyd[edit]

Mr. Colin J. Boyd. Canadian, Reel. Canada, Cape Breton. A Major. Standard tuning (fiddle). AABB. Composed by Cape Breaton fiddler-composer Dan R. MacDonald (1911–1976) in honor of his friend and older contemporary, Scottish style fiddler Colin J. Boyd (1891–1975), born in West Lakevale, Antigonish County, Nova Scotia. Boyd was one of the first Cape Breton fiddlers to record on 78 RPM, in 1932, when he traveled to Montreal to record for Brunswick Records of Canada. This passage (from "The Cape Breton Fiddler: A Talk with Allister MacGillivray", Cape Breton's Magazine, Issue 29, p. 41) gives a flavor of their relationship, when he talks of the oral transmission of tunes during visits, even in the midst of day-work: 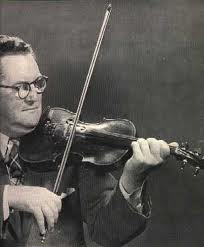 You take a fellow like Angus Allan Gillis. He worked hard at home, ran the family farm for years and years. He would have visitors a lot. Maybe Dan R. MacDonald or other traveling violin players would drop in and stay. He'd be at the chores, and Dan R. would be hanging over him--"Do you know this tune, do you know that tune?" So he still got to swap tunes. I got a letter from the daughter of Colin J. Boyd from Antigonish, who was a pioneer in the recording of Scottish music in Canada. She tells that when Dan R. came to visit her father, he jut went flicking potato bugs off his plants and that sort of thing, while Dan R. just rambled on and on about new tunes he'd heard, and had the fiddle right out in the field with him. While they were out pitching hay, Dan R. was swapping tunes, with his fiddle in his hand. A lot of people looked forward to these visits by these vagrant fiddlers because that's how they learned new tunes and new techniques and got to talk about the thing that meant so much to them. And the fiddlers would come and stay long periods of time, come bag and bundle and say, "I'm moving in for a couple of days." 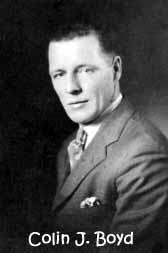 Back to Mr. Colin J. Boyd[edit]