Find traditional instrumental music
This is the stable version, checked on 12 July 2022.
Jump to: navigation, search 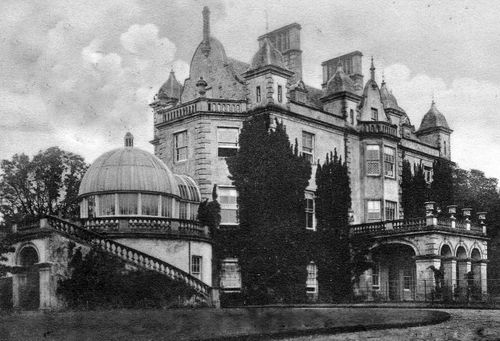 Arndilly House, Craigellachie, Banffshire
MRS. McDOWAL GRANT OF ARNDILLY'S STRATHSPEY. Scottish, Slow Strathspey (whole time). E Flat Major. Standard tuning (fiddle). AAB. Composed by William Marshall (1748-1833). A Scottish fiddler and composer, Marshall is most famous for his many fine strathspeys. Marshall worked for much of his life for the Duke of Gordon as the Steward of his Household, and it is fortunate that the Duke was an enthusiastic supporter and patron of Marshall’s music. Mrs. McDowal Grant was Eleanor Mary Grant (d. 1832), the daughter of Chief of Grant and wife of David McDowal-Grant, who lost a hand at the Battle of the Saints. She lived at Arndilly House, Rothes, built in 1770 on the site of the old church and glebe lands of Artentol in the shadow of the 1,544 foot Ben Aigan (Moyra Cowie, The Life and Times of William Marshall, 1999). Arndilly was remodeled in 1826 and again in 1850 in the Scots baronial style.