Nether Bow has Vanished (The)

Back to Nether Bow has Vanished (The)[edit]

NETHER BOW HAS VANISHED, THE. Scottish, Reel, Strathspey. John Glen (1891) finds the earliest printing of this tune in musician and music publisher Robert Bremner's 1768 2nd collection (p. 104). The title refers to what was the last surviving gate or Port in the medieval wall of old Edinburgh, the Nether Bow. It was originally constructed in the year 1369 in the High Street, now part of the Royal Mile, on the boundary between Edinburgh and Canongate. It survived until 1764 (just prior to Bremner's publication) when it was demolished to improve traffic flow in the Royal Mile. 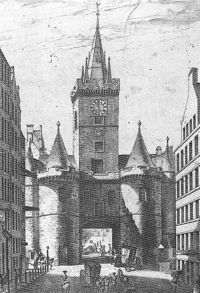 Nether Bow has Vanished is also the name of a Scottish Country Dance (RSCDS Book 13), to which other tunes are now played.


Recorded sources: Puirt a Baroque - "Return of the Wanderer."

Back to Nether Bow has Vanished (The)[edit]