Old Aunt Jenny with Her Night-Cap On

Find traditional instrumental music
This is the stable version, checked on 30 October 2019.
Jump to: navigation, search

Back to Old Aunt Jenny with Her Night-Cap On

OLD AUNT JENNY WITH HER NIGHT-CAP ON. Old-Time, Breakdown. USA; West Virginia, Kentucky. G Major. Standard tuning (fiddle). AB. Bruce Greene learned the tune from Estill Bingham (1899-1990) of the Hensley Settlement, Pineville, Bell County, Kentucky, near the Cumberland Gap (where Kentucky, Tennessee and Virginia abut one-another). He played it in G Major, although an 'A' major cross-tuned version was played by Kentucky fiddler Lella Todd [1] (1891-1978). Titon (2001) points out that several different tunes go by this title. He recorded Indiana fiddler Clyde Davenport playing a G tune, unrelated to Bingham's Kentucky tune, that he calls "Old Lank Jenny with Her Nightcap On." Bingham was the youngest of thirteen children, and took up the fiddle at age seven. 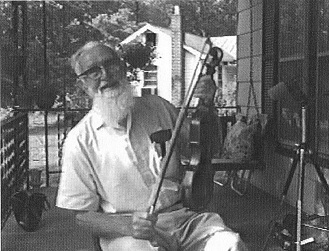 Who's been here since I been gone?
Old Aunt Jenny with her nightcap on.

However, the whole tune sounds quite like a song air and may have had more substantial verses to it at one time. The second strain of Bingham's version is 'crooked', in that the cadence of each phrase of the strain has an extra two beats in the measure.

Source for notated version: - Estill Bingham (Pineville, Bell County, Ky., c.1986) [Tition]. According to fiddler Bruce Greene, Bingham learned the tune from an itinerant preacher by the name of Columbus "Lum" Green, who would circuit to the remote area every few months to conduct services, after which he would play the fiddle.

Back to Old Aunt Jenny with Her Night-Cap On