Princess of Wirtemburg’s Departure from England (The)

Back to Princess of Wirtemburg’s Departure from England (The)

PRINCESS OF WIRTEMBURG'S DEPARTURE FROM ENGLAND, THE. Scottish, Air (whole time). B Flat Major. Standard tuning (fiddle). AABB. The air was published by the Edinburgh music publishing firm of Nathaniel Gow and William Shepherd in a volume entitled A Collection of Entirely Original Strathspey Reels, Marches, Quick Steps &c., "by Ladies resident in a remote part of the Highlands of Scotland, as corrected by Nath. Gow." Unfortunately, the composers names are not given. The Leeds antiquarian Frank Kidson (1854–1926) penciled a note in his copy of the volume that the composers were, or included, “the Misses Whyte,” and modern researcher Charles Gore thinks “the Misses Whyte” may possibly be a Miss White and a Miss Brocky, of Morayshire, east Highlands. 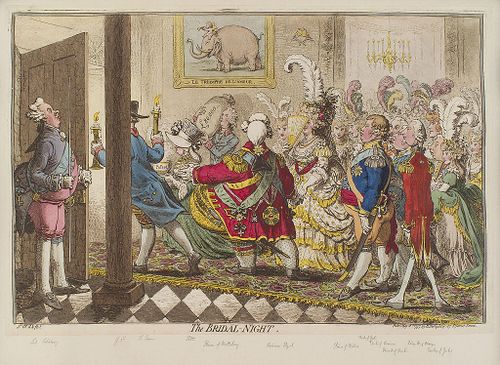 'The Bridal Night' by James Gilray, a satire on Frederick's marriage to Charlotte.

The title refers to Charlotte, Princess Royal [1] (1766-1828), eldest daughter of King George III of England and his wife, Charlotte of Mecklenburg-Strelitz. She married the Hereditary Prince Frederick of Württemberg, the eldest son and heir apparent of Duke Frederick II Eugene of Württemberg and his wife, Margravine Sophia Dorothea of Brandenburg-Schwedt, on May 18th, 1797, at the Chapel Royal, St. James's Palace. By the end of the year the young Frederick succeeded his father as the reigning Duke of Württemberg, and the couple settled into Ludwigsburg Palace, Stuttgart. She became a queen in 1803 when Frederick, in a deal with Napoleon, was crowned King of Württemberg, an awkward arrangement for her parents until Frederick changed sides, eschewed his alliance with Napoleon and joined the allies. She died in 1827 a year after visiting England for the first time since her wedding to Frederick in 1797.

See also "Princess of Wirtemburg's Fancy (The)," a country dance printed in 1798 in London by Longman & Broderip.

Back to Princess of Wirtemburg’s Departure from England (The)