RAMSGATE ASSEMBLY. English, Country Dance Tune (3/4 time). F Major. Standard tuning (fiddle). AABBCC. The melody dates to the year 1795. Ramsgate [1], a seaside town in the district of Thanet in east Kent, England, was one of the great English seaside towns of the 19th century, and an embarkation point for travel to the Continent. Rules for the Ramsgate Assembly Room were printed in 1809 in Picture of Margate, being a complete guide to all persons visiting Margate, Ramsgate, and Broadstairs (pp. 104-107): 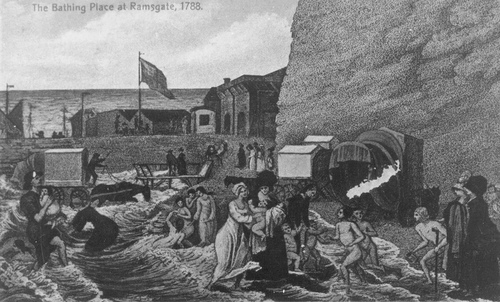 I. That every person, to be entitled to walk and play cards in the rooms, during the season, to pay 7s. 6d.

III. That there be no dancing whatever in the rooms on the nights of the card assemblies.

V. That all persons playing at whist, quadrille, commerce, or loo, to pay 10s. 6d. for two packs of cards; 7s. for a single pack; and lottery-tables to pay 15s. No other games to be played in the rooms, without the permission of the master of the ceremonies.

VI. That no person be permitted to play with cards which have been left by another party.

As the utmost decorum is necessary to be observed in all public assemblies, the master of the ceremonies requests of the company a strict compliance with the following regulations:

I. That on ball-nights no ladies be admitted into the great room in habits, nor gentlemen in swords, boots, or pantaloons; military gentlemen excepted.

II. That the balls do begin at eight o'clock and finish at twelve precisely, even in the middle of a dance.

III. That after a lady has called a dance, when it is finished, her place in the next dance is at the bottom.

IV. That all ladies who go down a dance do continue in their places till the rest have done the same.
N.B. As a deviation from this rule is considered very impolite, and gives universal offence, the master of the ceremonies will pay the utmost attention possible, to see it strictly observed.

V. That ladies, whether of precedence or not, do take their places at the bottom after a country-dance is begun; and that no lady do permit another to stand above her after she has taken her place in the set.

VI. That two sets for country dances be not formed till upwards of twenty couple stand up; to be then equally divided, and no person to change from one set to another.

VII. That no person be admitted into the gallery without a written order, signed by the master of ceremonies; and no servants to be admitted up stairs on any account whatever.
N.B. The master of the ceremonies takes this opportunity to request the favour of such ladies and gentlemen whom he has not the honour of knowing personally, that they will afford him an early occasion of being introduced to them, as it is not only his wish that all improper company should be kept from the rooms, but as he is, and ever will be, ambitious to shew every individual that attention which it is not more his duty than his inclination to observe.