RICHER'S HORNPIPE. AKA – "Richar's Hornpipe," “Ricker’s Hornpipe.” AKA and see "Richard's Hornpipe." English, Scottish; Hornpipe. D Major. Standard tuning (fiddle). AB (most versions): AABB (Howe, Sumner). The tune dates to around 1798. Richer (first name unknown) was a rope and circus dancer on the popular stage during the era when the character based (usually nautical) solo hornpipe was in vogue. He had celebrity in his day, and astonished audiences with his performances on the tight wire, as attested by Joseph Strutt, who wrote in 1808 (The sports & pastimes of the people of England, p. 201):

During the last century, Sadler's Wells was a famous nursery for tumblers, balance-masters, and dancers upon the rope and upon the wire. These exhibitions have of late years lost much of their popularity: the tight-rope dancing, indeed, is still continued there by Richer, a justly celebrated performer. This man certainly displays more ease and elegance of action, and much greater agility, upon the rope, than any other dancer I ever saw: his exertions at all times excite astonishment, while the command the applause of the spectators.

William Hazlett was similarly impressed and wrote in his essay “The Indian Jugglers” from Table Talk (1828): 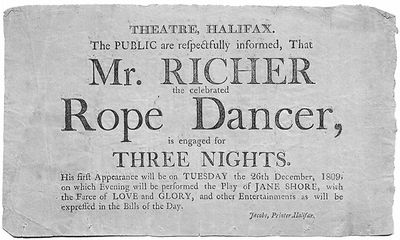 It is a great many years since I saw Richer, the famous rope-dancer, perform at Sadler's Wells. He was matchless in his art, and added to his extraordinary skill exquisite ease, and unaffected natural grace. I was at that time employed in copying a half-length picture of Sir Joshua Reynolds's; and it put me out of conceit with it. How ill this part was made out in the drawing! How heavy, how slovenly this other was painted! I could not help saying to myself, 'If the rope-dancer had performed his task in this manner, leaving so many gaps and botches in his work, he would have broke his neck long ago; I should never have seen that vigorous elasticity of nerve and precision of movement!' - Is it then so easy an undertaking (comparatively) to dance on a tight-rope? Let any one, who thinks so, get up and try.

The 1st strain pf "Richer's Hornpipe" hints at "Rickett's Hornpipe." Irish collector P.W. Joyce learned the tune as a boy in County Limerick in the 1840's but had the title as "Richard's Hornpipe."