Find traditional instrumental music
This is the stable version, checked on 18 October 2022.
Jump to: navigation, search

SET AMÉRICAIN 2ÈME PARTIE. AKA and see "Breakdown de Neufchâtel," "Clog en Fa (1) (Boucher)," "Fancy Clog Hornpipe," "Reel St. Jean," "Remontée au chantier (La)," "Sautillante (La)," "Virginia Hornpipe (1)." French-Canadian, Reel (cut or 2/4 time). D Major ('A' part) & B Minor ('B' part). Standard tuning (fiddle). AABB. This is the tune that is popular in contra-dance and Quebecois sessions with the paired-down title "Set américain." It was recorded in 1945 by Quebec City accordion player Théodore Duguay (1904-1950), and was one of only a couple of recordings he made. 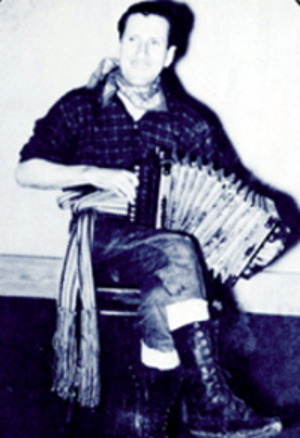 Théodore Duguay
A version of the melody can be found in J.A. Boucher's Le Répertoire du Violoneux[1] (Montreal, 1933, No. 7) under the title "Clog en Fa (Boucher)." Boucher's version is set in dotted clog/hornpipe rhythm, and researcher Jean Duval notes that there is every indication that the tune was originally played in Quebec in the keys of F Major/D Minor, as in Boucher's collection. This was also the key employed by Montreal fiddler Isidore Soucy who recorded a 'crooked' or irregular version of the melody in 1927 under the title "Sautillante (La)" (Starr 15338a).

Duval also notes an earlier cognate version of the tune in Glasgow music publisher James S. Kerr's Merry Melodies vol. 3 (c. 1880's, No. 357) where it can be found as "Virginia Hornpipe (1)." An American version of the tune was published a few years still earlier, in Coes' Album of Jigs and Reels (1876) as "Fancy Clog Hornpipe." In Ireland, variants include Rev. Luke Donnellan's Oriel region, south Ulster, "Sterling Tom" and "Miss Hamilton's Reel"[1].