Find traditional instrumental music
This is the stable version, checked on 21 August 2019.
Jump to: navigation, search

Back to Sigr. Spinacuta's March for the tight rope 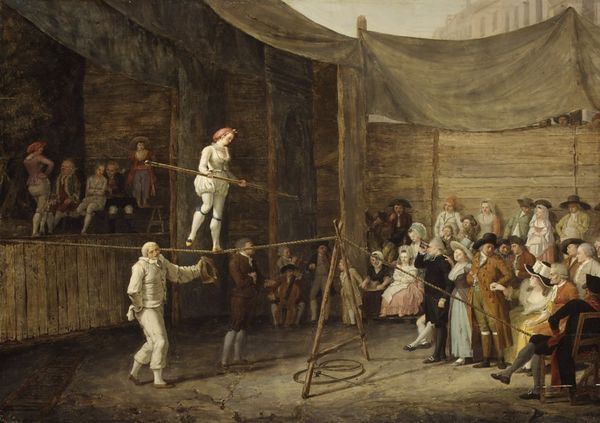 The Rope Dance, by Léonard Defrance (Flemish)
SIGR. SINACUTA'S MARCH FOR THE TIGHT ROPE. Scottish, March (6/8 time). D Major. Standard tuning (fiddle). AABB. Antonio Spinacuta was the tightrope dancer for the Edinburgh circus during the 1791 season. A 'correspondent' to the newspaper Caledonian Mercury attended the Edinburgh circus on opening night and reported the Spinacuta played the violin while rope dancing (he also sometimes played the guitar as well) to the delight of the audience:

The tightrope dancing by Signor Spinacuta is a most wonderful performance...His performance on the violin on the rope, his descent into the circus (to the terror of the fidlers [sic] under him, excited the highest approbation.[1]

The writer also opined that the circus's orchestra seemed under-rehearsed on opening night, but was pleased that the band was numerous and "the music was for the most part Scotch, and well chosen." Edinburgh circus researcher Kim Baston explains that Spinacuta's act involved sliding down a rope fixed diagonally from gallery to stage, passing over the orchestra, so that the musicians indeed may have been frightened [2].

Back to Sigr. Spinacuta's March for the tight rope