Back to Turpin Hero

TURPIN HERO. English; Air, Country Dance (2/2 time). G Dorian. Standard tuning (fiddle). One part. This tune is from an 18th century broadsheet ballad entitled "O Rare Turpin Hero," whose subject was highwayman Dick Turpin, a legend in his own lifetime. Much like the dime-novel exploits of Calamity Jane or Wild Bill Hickock in the American west, Turpin's adventures caught the popular imagination, especially after the publication of the novel Rookswood (1834) by Harrison Ainsworth in which the highwayman appeared as a character. Similar to American wild west outlaws (or near-outlaws), the English tales of highwaymen tended to run together. Williamson (1976) remarks that the tale of Turpin's ride from London to York on his trusty mare "Black Bess" was also attributed to another notorious highwayman, John Nevison, alias Nicks, in the days of Charles II. "Nicks, to establish an alibi, rode form Gads Hill near London to York. One hundred ninety miles in about fifteen hours!" He was thereafter known admiringly as Swift Nick. 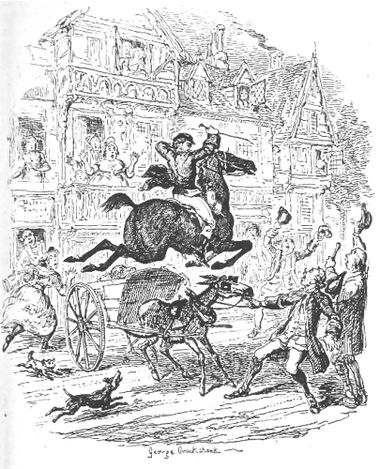 The ballad claims that Turpin was from Dublin, but the facts differ. He was born in 1706 at Hempstead near Saffron Walden, Essex. The son of an innkeeper, he was apprenticed to a butcher after which he set up business operating a butcher shop—and stealing sheep, lambs and cattle. Discovered at this, Turpin tried his luck as a publican but also joined a gang called the Essex or Gregory Gang, who forcibly entered farm houses and bullied the terrified female inhabitants into revealing their valuables. Williamson’s version is that as a young man he was suspected of some paltry crime, and fled to join a gang of deer thieves and smugglers in the wilds of Essex. When the gang broke up, Dick went into partnership with one Tom King, a dashing highwayman of local repute whose turf was Epping Forest. This relationship ended when, after the robbery of a horse, a shootout occurred with constables—Turpin’s shot missed his intended target and hit instead his partner King, who died as a result. Turpin was finally forced to leave when he murdered a gamekeeper of Epping Forest named Morris in 1737, escaping to Yorkshire, fast on the heels of his legend. He set up under an assumed name as a Yorkshire horse dealer, however, Turpin was too set in his ways and too volatile a personality for this to last long, and he soon renewed his criminal activities. One day after an unsuccessful outing hunting with the local minor gentry he returned home and shot his landlord’s rooster—when the aggrieved man complained, Turpin threatened to shoot him as well. The law was summoned and Dick was taken into custody, although his identity was only discovered when he wrote a letter to his brother-in-law. In what was an early instance of forensic indentification, his identity was discovered when the letter was returned to the post office as undelivered and the document was there reviewed by chance by his old schoolmaster, who had originally taught him to write. Turpin was tried and sentenced, and, as was the value of the times, went gamely and flamboyantly to his death. He bought a new suit of fustian cloth and new pumps, and paid five men to act as mourners. The York Courant for April 7th, 1739, reported that “with undaunted courage (he) looked about him, and after speaking a few words to the topsman, he threw himself off the ladder and expired in about five minutes.”

Back to Turpin Hero