Find traditional instrumental music
This is the stable version, checked on 5 April 2020.
Jump to: navigation, search

Back to Virginia Reel (2) 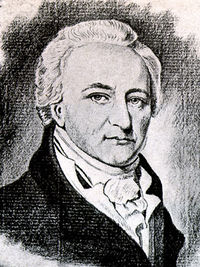 Being a collection of the most admired cotillions and country dances with their proper figures annexed. Including a variety of marches, minuets, reels, gavots, hornpipes, &c. The music composed and selected and the whole arranged as lessons for the pianoforte by Mr. [Alexander M.] Reinagle. The work to consist of eight numbers to be published every other week.

William Francis (1764–1827) was a Philadelphia dancing master who was a member of a theatrical company called the New Company until about 1821. Alexander M. Reinagle [1] (1756–1809), Philadelphia composer, conductor, pianist, and theatrical manager, was the son of Scottish musician and composer Joseph Reinagle, a famous trumpeter originally Austro-Hungarian, and Annie Laurie, who was Scottish. Alexander was born in Scotland and worked in London, and was an acquaintance and briefly a correspondent of C.P.E. Bach. In 1786 he emigrated to the United States.

Back to Virginia Reel (2)