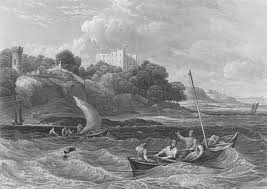 Wemyss Castle [1], Fife, dates from the 15th century when it was built by Sir John Wemyss to replace an older structure. Wemyss was the seat of the chiefs of Clan Wemyss since the twelfth century, and the castle was later the home of the Earls of Wemyss. Wemyss Castle was the place where Mary Queen of Scots met her second husband, Lord Darnley, in 1565. It survived through the centuries and is now a private residence.