Find traditional instrumental music
Jump to: navigation, search
This page has been proofread

This is the Urtext edition of "A Favorite Collection of Tunes with Variations adapted for the Northumberland Small Pipes, Violin or Flute"[1]

The first edition was published at the beginning of the nineteenth century and there are now only three of the originals known to exist. One belongs to the Society of Antiquaries and is kept in the Bagpipe Museum in Newcastle upon Tyne; the second is in the British Museum, and the third is in the Central Library of Newcastle upon Tyne.

Modern interest in Peacock was re-invigorated by the facsimile edition of 1980 published by the Northumbrian Piping Society on the initiative of Colin Ross, and by the contemporary recordings of "The Cut and Dry Band" in which he played with Alistair Anderson, Jim Hall and Anthony and Carole Robb.

The extensive research by Matt Seattle has been significant in promoting informed interest in the tunes, and the commentary which appears on the Folk Archive Resource North East FARNE website is largely his work. Papers in the NPS Magazine by Iain Bain and Les Jessop offer significant insights into Peacock and his world. Historical information and comments on the tunes appear in "Pea-

This Urtext is intended to supplement the earlier editions, and the reader is urged to consult them in parallel with this urtext edition.

Two digitalized (scanned) editions are now available on the Internet: the first is on the Folk Archive Resource North East FARNE Website, and has been used as the master source for this Urtext. A second edition exists at www.piob.info; this is a facsimile (photographed) edition and has been used as a second source of information.

"Peacock's Tunes" contains fifty tunes in all. Eight at least are Lowland Scottish, showing how early songs from over the Border have become popular south of the Cheviots; two are Highland, three are English, one Irish. Some of the remaining thirty-six are perhaps not Northumbrian, but most of them certainly are.

"URTEXT" indicates that the edition in front of you is faithful to the original and that any alteration is unavoidable, and has been marked as such. 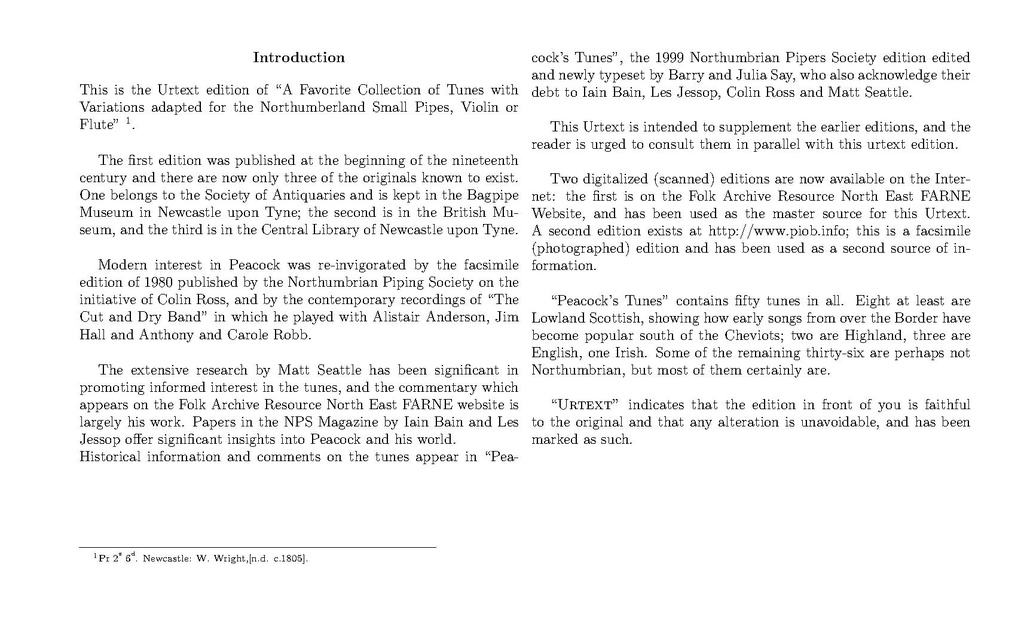