Find traditional instrumental music
This is the stable version, checked on 3 October 2020.
Jump to: navigation, search

Back to Cashmere Shawl (The)

CASHMERE SHAWL, THE (An Filleog Casmear). AKA - "Hunt in the Bog." AKA and see "Hut in the Bog (3)," "On the Road to Lurgan." Irish, Scottish; Reel. A Dorian (O'Neill): A Minor (Kerr). Standard tuning (fiddle). AAB (O'Neill): AA'BB' (Kerr). Breathnach prints a three part version of the tune from accordion player Sonny Brogan under the title "Hut in the Bog (3)." Famed County Sligo fiddler Paddy Killoran recorded the tune in New York in the 78 RPM era as "On the Road to Lurgan." 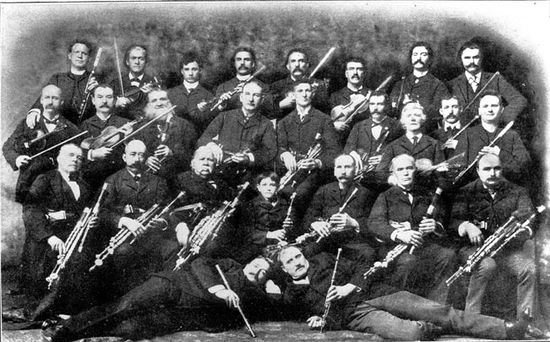 Chicago's Irish Music Club, c. 1903. James Kennedy is in the top row, at the extreme right.

Additional notes
Source for notated version : - Chicago Police Patrolman and fiddler James Kennedy who had the tune from his father, a celebrated local fiddler from Ballinamore, County Leitrim [O'Neill]. Alternatively, it was obtained from a trolley motorman named James Kennedy, whom James O'Neill (Francis O'Neill's collaborator on his early volumes) overheard whistling the tune while standing on a platform. O'Neill had him repeat the performance a number of times until he had the tune firmly in memory[1]

Back to Cashmere Shawl (The)