Find traditional instrumental music
This is the stable version, approved on 8 January 2023.
Jump to: navigation, search 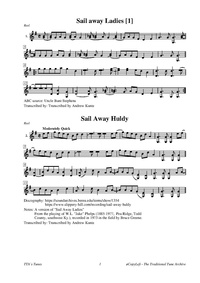 John L. "Uncle Bunt" Stevens won the title of World Champion Fiddler in 1926 playing this tune. Stephens' prize was said to be $1,000, a new suit, a car, and a new set of teeth.
Sail away Ladies 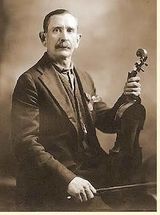 The earliest sound recordings of "Sail away Ladies" were by John L. "Uncle Bunt" Stevens [1] (1926-without words) and Uncle Dave Macon (1927-with words). Stephens was born in 1871 in Tallapoosa, near Lynchburg, southern middle Tennessee, and was a farmer for most of his life. He rapidly rose to fame in 1926 when he placed in regional competitions and then won the title of World Champion Fiddler in 1926 playing this tune, along with his version of “Old Hen Cackled (1) (The),” besting 1,876 other fiddlers in auto magnate Henry Ford’s series of contests. The competitions were held at Ford dealerships through the East and Midwest in the 1920's, and winners of the local contests were brought to Detroit to play in the championship round. Stephens' prize was said to be $1,000, a new suit, a car, and a new set of teeth. Harry Smith (Folkways FA2951, 1952) thought that Uncle Bunt Stephen’s performance (Columbia Records, 1926) was “probably similar to much American dance music in the period between the Revolutionary and Civil Wars.” After recording his four 78 RPM sides for Columbia, and making a short tour with some appearances on the Grand Ole Opry stage, Uncle Bunt retired from public life and returned to his farm in Tallapoosa. He died in 1951. Southern Kentucky fiddler Henry L. Bandy also recorded the tune for Gennett Records in 1928, although the side was not issued.

...more at: Sail away Ladies - full Score(s) and Annotations