Back to Lady Susan Stewart's[edit]

LADY SUSAN STEWART'S. Scottish, Strathspey. G Major. Standard tuning (fiddle). AAB. The melody appears in the 2nd Collection of Malcolm MacDonald of Dunkeld, who dedicated his volume to the Earl of Breadalbane. The title perhaps refers to Lady Susan Stewart (1767-1841), the second daughter of John Stewart, 7th Earl of Galloway and Anne Dashwood. In 1791 she married George Spencer-Churchill, 5th Duke of Marlborough, thereupon becoming the Marchioness of Blandford. When her husband succeeded to the Dukedom in 1817 she became the Duchess of Marlborough. 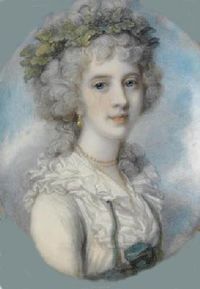 Churchill lived an extravagant life, loved horticulture, and had a reputation as a brilliant and eccentric, although dissolute, individual. In 1801 a scandal erupted when he rekindled an association with a former love (now married), and carried on a passionate affair with her until the woman's husband intervened. By that time the woman was pregnant, and Churchill claimed the child was his, which led the husband to divorce her, but Susan remained committed to her marriage to the Marquis. When Churchill became Duke in 1817 he and Susan took up residence in the magnificent Blenheim Castle, but it was not two years before he took a local 16 year old girl as his mistress, and Susan finally left him. From Wikipedia [1]: "Diarist Harriet Arbuthnot wrote one of her most scathing comments about the Duke following a visit to Blenheim in 1824":

The family of the great General is, however, gone sadly to decay, and are but a disgrace to the illustrious name of Churchill, which they have chosen this moment to resume. The present Duke is overloaded with debt, is very little better than a common swindler and lets everything about Blenheim. People may shoot and fish at so much per hour and it has required all the authority of a Court of Chancery to prevent his cutting down all the trees in the park.

Back to Lady Susan Stewart's[edit]