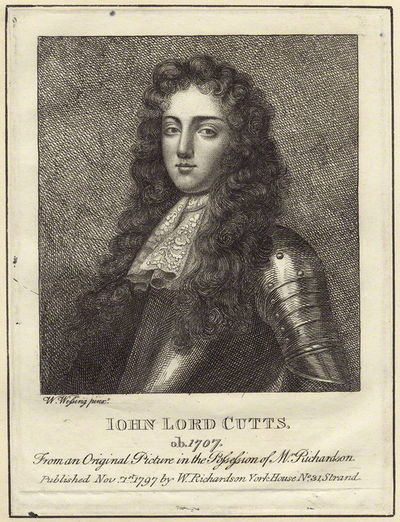 Lt. General Lord (John) Cutt [2] (1661-1707) was a military and literary figure who commanded a regiment for King William in Holland, and later in his Irish wars of 1690, and a division under Churchill at the Battle of Blenheim. General Hugh Mackay described Cutts in 1687 as "pretty tall, lusty and well shaped, an agreeable companion with abundance of wit, affable and familiar, but too much seized with vanity and self-conceit." He was popular and cut a dashing figure, and was a favorite in court, though sometimes lampooned for his fondness of poetry and the arts. Cutt was in charge of the Coldstream Guards in 1698 when fire broke out in Whitehall Palace (then the Royal Residence), and he led the force in trying to extinguish the conflagration; to no avail, as the building was nearly completely consumed. See also "My Lord Cutt's Delight/St. Catherine," from Henry Atkinson's 1694/95 music manuscript [3], presumably composed on the same person.