Marchioness of Huntly (1) (The)

Find traditional instrumental music
This is the stable version, checked on 19 April 2021.
Jump to: navigation, search

Back to Marchioness of Huntly (1) (The)

Marshall's 1822 Collection is dedicated to the Marchioness, Elizabeth Brodie [1] (1794-1864), wife of George (1770-1836), Marquis of Huntly and the future 5th Duke of Gordon. Elizabeth was the daughter of a wealthy merchant named Alexander Brodie and his wife, Elizabeth Wemyss, of Arnhall in Kincardinehsire. When Elizabeth and George married, at Bath in December, 1813, he was twenty-four years her senior. Elizabeth Grant of Rothiemurchas described them at the time: 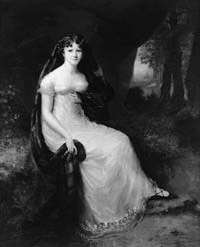 Lord Huntly now in the decline of his rackety life, overwhelmed with debts, sated with pleasure, tired of fashion, the last heir male of the Gordon line. His bride was young, and good, and rich but neither clever nor handsome. She made him very happy and paid his most pressing debts, that is her father did, old Mr. Brodie of the Burn, brother to Brodie of Brodie...He mad a really large fortune; he gave his daughter, his only child, £100,000 down, and left her more than another at his death. Really, to her husband her large fortune was the least part of her value: she possessed upright principles, good sense, and she turned out a first rate woman of business.

Moyra Cowie (The Life and Times of William Marshall, 1999), says the Marchioness was instrumental in the publication of Marshall's 1822 collection of music and was a great aid to Marshall, promoting his music to her friends. Despite a number of tunes composed in her honor, Hunter (1988) says Elizabeth was more partial to psalms and hymn tunes than dance music. Myra Cowie, however, says she was an accomplished musician, a fine pianist, and loved to play traditional Scottish music. When the old Duke died and George inherited the title the couple (who were to remain childless, to the regret of both) moved into Gordon Castle. It is telling, perhaps, that during their tenure no balls were held at the residence.

Elizabeth became increasingly disenchanted with her life at the top of society; she was shy and lacked the social polish needed for success, and she became increasingly isolated. She had an evangelical conversion in the early to mid-1820s, soon after the publication of many tunes in her honor. In later life Elizabeth devoted herself to charitable works and to religion, and eschewed fashion. 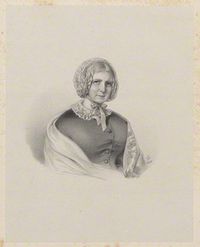 The Duchess of Gordon, later in life

Back to Marchioness of Huntly (1) (The)