This is the stable version, checked on 2 January 2021.
Jump to: navigation, search

Back to Drunken Gauger (1)

DRUNKEN GAUGER [1], THE (An Túiséara ar a Mheisce). Irish, Set Dance (6/8). Ireland, County Clare. G Major. Standard tuning (fiddle). One part (Roche): AABB (Breathnach, Taaffe/Fiddler). At one time a 'gauger' was a functionary whose job it was to monitor public houses to insure that various sized drinks were served in vessels of accurate measure: i.e. that a pint drink served actually measured a full pint, a gill measured a gill, and so on. Alternatively (or additionally) a gauger's job was to check the strength of the whiskey to make sure it wasn't watered down [1]. Such intense scrutiny of alcoholic conveyances would undoubtedly be a thirsty business, perhaps helped along by a hopeful or sly publican if the measure might be short. Not a few gaugers probably achieved the level of inebriation required for the title. The set dance is supposed by some to imitate the attitude of a staggering gauger, weary and perhaps too 'affected' by his work. Breathnach says the set dance is especially associated with County Clare. The term 'gauger' has largely died out, says Caoimhin Mac Aoidh, although it is retained in modern usage (with a derogatory connotation) in County Donegal for a social service functionary whose job it is to monitor fraud with regard to welfare, or 'the dole'.

The following passage, from William Palmer’s Recollections of a Visit to Great Britain and Ireland in the Summer of 1862 (Quebec, 1863, pp. 70-72), illustrates the work of the Irish gauger (spelled 'guager' in the book): 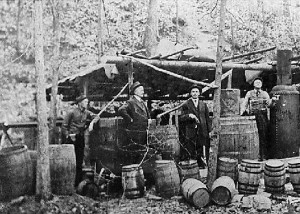 A poteen still in Ireland

"Do you know the Lightfoots?" said Mrs. Jenkins. "Yes," said Jenkins, "they are a respectable family. Mr. Lightfoot was a guager in Ireland and Scotland for many years, a post which he could not have held were he not a gentleman." "What are guagers?" inquired Mrs. Jenkins. "They are," replied Jenkins, "excise officers appointed by the government to make periodical returns of all liquors and other articles subject to duty made and sold in their respective districts, and formerly it was their duty to prevent people from making or selling strong liquors without a license. Some of the peasantry in Ireland have been in the habit of making whisky called poteen, in miserable huts in hidden places, and so constructed and guarded as to elude the vigilance of the guagers. They did the principal part of their work at night, and always kept a look out, who, when he saw a guager or suspicious-looking stranger, gave the alarm by shouting "Mad dog," whereupon they hid their stock and apparatus, if possible, and took to their heels; and no wonder, as every person found in the distilling house was liable to be arrested and confined in gaol for six months, and all their grain and liqour seized and destroyed. Many a time they have been put to great loss and consternation by false alarms. Sometimes gentlemen on fowling or hunting excursions have been taken for guagers and put in dread and fear of rough treatment until they proved that they were not guagers. Once they caught a real guager, and after all sorts of rude and frolicsome gestures and merriment without inflicting any injury, they blindfolded and carried him by the legs and arms a considerable distance, singing a merry tune all the way, to a shallow bog-hole where they pitched him in and kept him floundering about until they hid all their distilling material and apparatus,--hence the well known tune 'Paddy was up to the guager.' Although they often escaped and made great profits of their grain, by the high price of liquor, it was at great risk and hardship, and was at best reckless, ruinous traffic, they were in continual terror while robbing the government of the revenue, and when caught they were fined, imprisoned, their implements and stock-in-trade destroyed, and their families suffered great privation in consequence, and they often drank of the liquor they made to such excess that they were easily caught, and neglected their legitimate business. Where any part of their distilling apparatus was found by the guager and soldiers when 'still hunting,' the whole townland was heavily fined, and half the fine given to the informer, and the other half to the guager; this, however, was discontinued, as dishonest guagers and informers were in the habit of getting distilling apparatus conveyed to places under cover of night and getting the fines. The police are now the only body authorized to prevent illicit distillation, which I am glad to learn is becoming a hopeless enterprise.

Charlie Piggott, in his book Blooming Meadows (1998), in the essay on Kilmaley, County Clare, fiddler, flute player and uilleann piper Peader O'Loughlin, remarks on tunes being disseminated into local, isolated traditions in Ireland by visiting musicians. It is remembered that "The Drunken Gouger" was introduced into the Kilmaley-Connolly, Clare, area "from the repertoire of dancing-master Paddy Barren, who regularly visited the O'Loughlin household and held dancing classes there." The tune is now commonly played throughout Clare. Clare fiddler Junior Crehan was recorded playing the tune and talking about it beforehand; he remembered it from the mendicant dancing master Barron's second visit to his area, around 1935 (Barron's first visit had been for an extended period from 1914-1918). Crehan learned the tune at the behest of Barron, who wanted him to play for the dancers, to whom Barron would teach both steps and sets for a shilling for three nights of instruction.


Back to Drunken Gauger (1)