This is the stable version, checked on 29 May 2020.
Jump to: navigation, search

Back to Hector the Hero

HECTOR [MACDONALD] THE HERO. Scottish, Lament ("with intense sadness," 6/8 time). A Major. Standard tuning (fiddle). AAB (Hunter, S. Johnson, Skinner/Harp): AA'BB (Perlman): ABC (Martin, Skinner). Composed by the great Scots fiddler and composer J. Scott Skinner (1843-1927) in honor of Major-General Sir Hector MacDonald (1857 - 1903), one of the most famous Victorian-era British military figures. MacDonald (Eachann Gilleasbaig MacDhòmhnaill in his native Scots Gaelic) was born a crofter's son in the Black Isle in Rosshire. When he turned eighteen, he enlisted in the 92nd Gordon Highlanders. He came up through the ranks, serving as a color-sergeant in the Afghan War, until he was promoted to the rank of 2nd Lieutenant at the end of those hostilities. Transferred to South Africa, he was mentioned in dispatches in the 1st Boer War, and in 1885 he led a military expedition up the Nile to Sudanese territory. In 1888 he took part in the Battle of Sunkin and a year later won the Distinguished Service Order for his service in Sudan. He remained in the Sudan for the next decade, seeing action in the Battle of Tokar (1891), and leading the 2nd Infantry Brigade in the Dunglen Expeditionary Force, by which time he was promoted to the rank of Brigadier-General. During the next two years he took part in the battles of Khartoum and Omdurman. In the latter battle, he was credited with saving the day when, after Lord Kitchener had unwittingly exposed his flank to the Mahdist dervishes, MacDonald maneuvered his troops to hold them off until the commander could redeploy the main force. Omdurman made MacDonald a celebrated British military hero and he subsequently served as the Aide de Camp to Queen Victoria and as a Major General with the Highland Brigade in South Africa during the Boer War. In 1901 he was knighted and the next year was stationed as Major General with British forces in Ceylon. The local planters apparently did not get along with the crofter's son and in 1903 accused him of homosexual activity with native boys. MacDonald traveled back to London to appeal against a local trial in Ceylon. Turned down and ordered back to face certain disgrace, he committed suicide in a Paris hotel.

Although the charge of homosexuality may well have been true, it was popularly believed by all levels of society in Scotland at the time that MacDonald had been framed. Soon after the incident Edward VII made his first visit to Scotland, and the atmosphere was decidedly chilly.

This ballad was written in 1903 by Thomas McWilliamin in the soldier's honor: 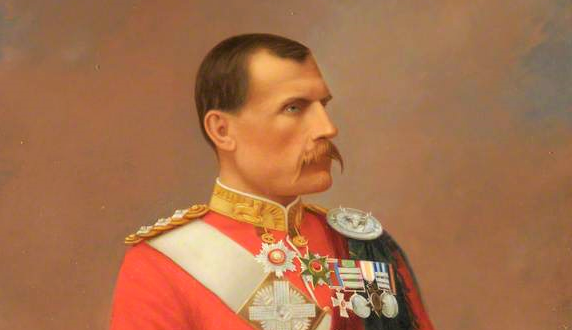 Lament him, ye mountains of Ross-shire;
Your tears be the dew and the rain;
Ye forests and straths, let the sobbing winds
Unburden your grief and pain.
Lament him, ye warm-hearted clansmen,
And mourn for a kinsman so true
The pride of the Highlands, the valiant MacDonald
Will never come back to you.

Lament him, ye sons of old Scotia,
Ye kinsmen on many a shore;
A patriot-warrior, fearless of foe,
Has fallen to rise no more.
O cherish his triumph and glory
On Omdurman's death-stricken plain,
His glance like the eagle's, his heart like the lion's
His laurels a nation's gain.

O rest thee, brave heart, in thy slumber,
Forgotten shall ne'er be thy name;
The love and the mercy of Heaven be thine;
Our love thou must ever claim.
To us thou art Hector the Hero,
The chivalrous, dauntless, and true;
The hills and the glens, and the hearts of a nation,
Re-echo the wail for you.

Skinner composed some 600 melodies, and "Hector the Hero", penned at his home in Monikie 27 March, 1903 [1], is considered among his best. It was played (as "Hector MacDonald's Lament") by Skinner in his 1921 concert tour in a set romantically entitled "Spey's Fury's." Perlman (1996) notes that the melody is currently played on Prince Edward Island as a lament at funeral services.

Back to Hector the Hero