This is the stable version, checked on 1 August 2019.
Jump to: navigation, search

NANCY TILL. AKA and see "Cane Break (2) (The)," "Come Love Come," "Down in de Canebreak," "Nancy Dill." American, Air and Two-step (4/4 time). G Major. Standard tuning (fiddle). AA'BB'. A minstrel-era song written anonymously and published in 1851. It was first performed by White's Serenaders, a popular blackface minstrel troupe, and "Nancy Till" was their most popular song. The lyric begins: 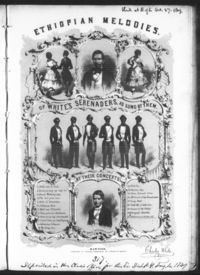 
Down by de cane brake,
Close by de mill,
Dere I met a yaller gal,
And her name was Nancy Till;
She know'd dat I loved her,
She know'd it berry long,
I'm going to serenade her,
An' dis shall be de song.

The tune appears in England in Peter Kennedy's Fiddler's Tune-Book (1951) as set as a schottishce, "Nancy Dill" with the alternate title "Cane Break (2) (The)." Musician and historian Vic Gammon relates playing the tune with the older mouth organ player Terry Potter in Sussex in the 1970s and 80's, and assumed that Potter had the tune from the British square dance boom of the 1940's and 1950's, where it was the American import "Down in the Cane Break." He later discovered Potter had American singer Frank Crummit's 78RPM recording or the tune, and noted it was in Kerr's as "Nancy Dill." "It had probably been played in Britain up to a century before we tore into it at Saturday night barn dances," remarked Gammon[1].