Find traditional instrumental music
This is the stable version, checked on 27 December 2019.
Jump to: navigation, search

Back to Admiral Howe’s March

ADMIRAL HOWE'S MARCH. AKA and see "Sir George Rodney's March." English, March (whole time). C Major. Standard tuning (fiddle). AABB. 'Admiral Howe' was Richard Howe [1], 1st Earl Howe (1726-1799), who commanded the naval forces for Britain during the War of American Indepndance, and who also served on the peace commission at the end of the conflict. It was Adiral Howe who was in command of the British fleet during the victory at the Glorious First of June in 1794, against the ships of the First French Republic. 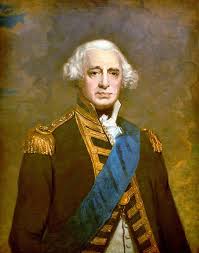 The melody was also entered into the c. 1780-1804 music manuscript collection of fifer or fiddler John Fife, who may have been from Perthshire, and may also have made entries at sea (there are references to battles in the Caribbean and the Mediterranean). It was also entered (along with a number of tunes from Aird's 5th collection) into the large 1840 music manuscript collection of multi-instrumentalist John Rook, of Waverton, near Wigton, Cumbria.

Back to Admiral Howe’s March