Ah! Sure Such a Pair

Back to Ah! Sure Such a Pair[edit]

AH! SURE SUCH A PAIR. AKA and see Lowland Lads (The)," "New Highland Laddie (2)." Irish, Jig or March (6/8 time). G Major. Standard tuning (fiddle). AABB. The jig was originally printed in David Rutherford's Art of Playing on the Violin (c. 1755) as "New Highland Laddie (2)." The melody was used as the air for the song “Ah, sure a pair was never seen” from Richard Sheridan’s [1] (1751-1816) comic opera The Duenna (1775). The work was staged at Drury Lane and Covent Garden, London. The music for the production was composed by a father and son, both named Thomas Linley, although the opera is chiefly remembered for its libretto, which was the work of Sheridan. In fact, the libretto was well-enough thought of to form the basis of an opera by Roberto Gerhard, and for Prokofiev’s Betrothal in a Monastery. Linley the son was a friend of the young Mozart, while the elder Linely was Sheridan’s father-in-law. 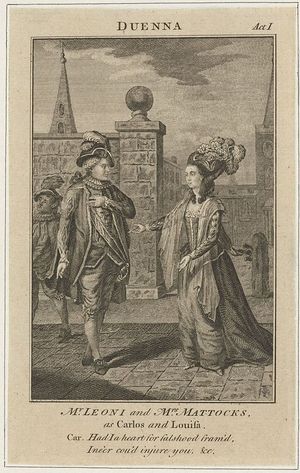 The melody appears in the American publication Riley’s Flute Melodies (New York, 1814). New Hampshire flute player Newt Tolman, author of Quick Tunes and Good Times (1972) and the Nelson Music Collection (1969), was wont to spontaneously launch into this tune when playing at contra dances (no matter what anyone else was playing!), just as a buxom young lass would dance by the band (Dudley Laufman, Fiddle-L 2007).

Back to Ah! Sure Such a Pair[edit]