Back to Air in Queen Mab

AIR IN QUEEN MAB. English, Scottish; Air (6/8 time). D Major. Standard tuning (fiddle). AABB. Queen Mab was a pantomime or an afterpiece (a short play after the mainpiece; in this instance, Queen Mab was staged after a revival of The Beggar's Opera) written by Charles Burney [1] (1726-1814) who composed the music, although it also contained music by James Oswald and others) and the actor Henry Woodward and staged in Drury Lane the day after Christmas, 1750. It was advertised: 'A New Entertainment in Italian Grotesque Characters call'd Queen Mab, Harlequin by Mr. Woodward'..." Presumably, the 6/8 jig was a piece from Burney's production. See also James Aird's "Dance in Queen Mab" and "Queen Mab" for other tunes associated with the pantomime. 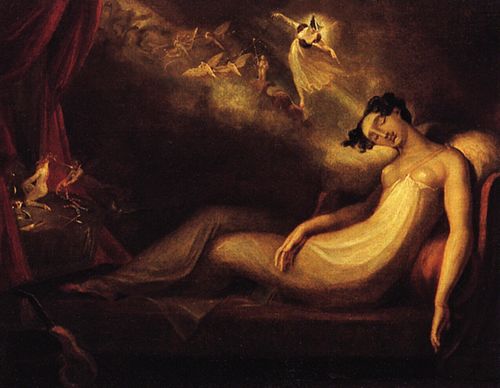 Queen Mab, by Johann Heinrich Füssli (1741-1825), a Swiss painter who worked primarily in Britain
Queen Mab [2] is a fairy who is mentioned in Shakespeare's Romeo and Juliet. She is associated with dreaming and the production of dreams, and has been described as a midwife to help sleepers 'give birth' to their dreams.

Back to Air in Queen Mab