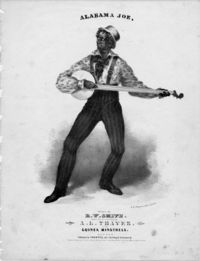 The traditional date of the minstrel era is usually given as 1843, with the debut of the Virginia Minstrels (Dan Emmett, Billy Whitlock, Dick Pelham, and Frank Brower) in New York City. However, there were blackface performers in the two decades preceding the group, who not only performed in blackface but who published songs that continued to be popular later into the century. "Alabama Joe" is one song that predates the Virginia Minstrels, and it is intriguing to note that the sheet music advertises the "Guinea Minstrels" who may be taken as a blackface performing group. The cover depicts musician A.L. Thayer in blackface, playing a long-neck banjo.