Back to Allan Water

ALLAN WATER. AKA – "Allen Water." Scottish, Air (whole time). F Major (Atkinson MS, Bowie MS): G Major (McGibbon, Oswald, D. Young's Set, Thomson). One part (Atkinson): AB (Thomson): AA'BB' (McGibbon): ABCD (Bowie MS): AABBCCDD (Young). The River Allan is a tributary of the Forth of Firth that flows through Perthshire and Stirlingshire before it empties into the Forth near Bridge of Allan. The air first appeared in the Scottish Blaikie Manuscript, 1692, and Northumbrian Henry Atkinson's 1694 manuscript, and first appears to have been published in Original Scotch Tunes, 1700, a collection of Scottish melodies issued by Henry Playford. Early versions also appear in the Bowie MS., the McFarlane MS. (1740, in a setting by David Young), and in a c. 1705 fiddler's MS. book in the collection of Francis Collinson (one of the earliest fiddler's MS. books extent). Young's variations were written based on the tune that appears in the Bowie MS., and "are to be played rather slower than the simple set of the tune (in Bowie). For the work of a literate composer in 1740 they are extremely old-fashioned, and keep the tune's pentatonic mode almost intact" (Johnson, 1983).

The title comes from a song set to the air, the words of which were given in Martha Brown's music-book of 1714. It begins: 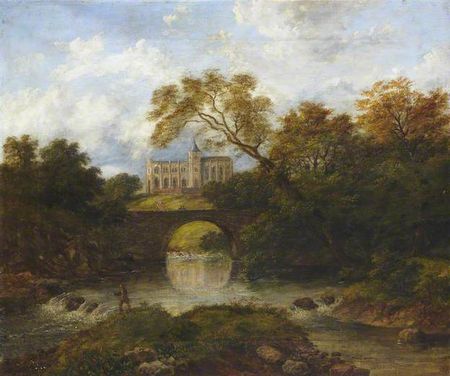 Bridge over the River Allan with Roofless Cathedral, by M. McLean

What numbers shall the Muse repeat?
What verse be found to praise my Annie?
On her ten thousand graces wait,
Each swain admires, and owns she's bonny.
Since first she trode the happy plain,
She set each youthful heart on fire;
Each nymph does to her swain complain,
That Annie kindles new desire.

The fiddle tune, however, does not fit exactly these lyrics, and needs be simplified and altered to fit. The Scots poet Robert Burns wrote a love song (appearing in Thomson's Scottish Airs) to the tune "Allan Water", commencing:

By Allan-side I chanc'd to rove,
While Phoebus sank beyond Benledi;
The winds were whispering thro' the grove,
The yellow corn was waving ready....

Burns told Thomson that he wrote his words for the air because the words to it in the Scots Musical Museum seemed unworthy. He added: 'I may be wrong, but I think it is not in my worst style.'

Back to Allan Water