Back to Amazon (The)

AMAZON, THE. English, Air (whole time). D Major. Standard tuning (fiddle). AB. The song was first published in Calliope (London, 1746), and was later published in Sadler's The Muses Delight (London, 1754), and Lewer's Amaryllis (London, 1760), as well as on song sheets. It was written by London musician and songwriter Samuel Howard (c. 1710-1782), who was a chorister in the Chapel Royal and later sang tenor for George Fredrich Handel (1732-1735). He was organist at both Clement Danes and St. Bride's Church, Fleet Street, and received a Doctor of Music degree from Cambridge in 1769. While he composed mostly theater music, he also wrote hymns. His "The Amazon" begins: 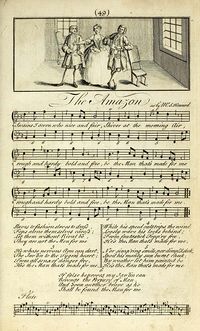 The Amazon, in Calliope

Back to Amazon (The)