Back to Ardross Castle

ARDROSS CASTLE (Caistal Ardois). Scottish, Pipe Jig (6/8 time). A Mixolydian. Standard tuning (fiddle). AAB. Adross Castle, built in the Scottish baronial style, is in the eastern Highlands region of Ross and Cromarty, Scotland, about 30 miles north of Inverness. The estate of Ardross was in the hands of the Duke of Sutherland in the late 18th century. 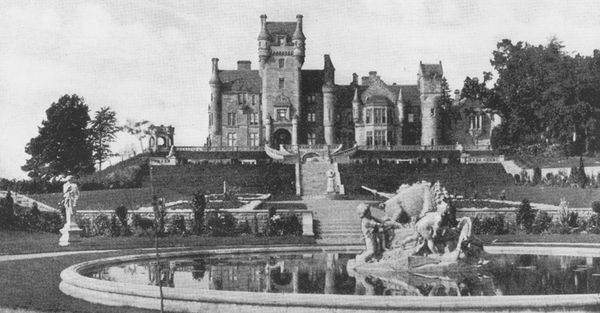 According Gunn's note with the tune it was "Inserted in honour of Mr. Mathison's Improvements," and this refers to the sale of the estate in 1845 to Sir Alexander Matheson (1805-86), 1st Baronet, and the subsequent renovations he carried out. Matheson had made his fortune one of the founders of Jardine Matheson & Co., a merchant bank with branches in Hong Kong and the East, and which was heavily invested in trade with opium, cotton, tea, silk and a variety of other goods. The history of their capitalist enterprise makes for fascinating but uncomfortable reading [1]. He returned to Scotland in 1839 and used his fortune to by Ardross and a huge swath of the surrounding countryside. He hired William MacKenzie as factor and began developing the estate with an eye to attracting with improved land for agriculture. They were successful, and by 1875 had more than quadrupled the number of tenants on the estate. Architect Alexander Ross (1834-1925) was commissioned to re-design Ardross Castle in the Scots Baronial style, which he did by incorporating the existing mansion and adding another thirty rooms. In addition pleasure grounds were laid out, open to the public, that extended over 700 acres on both sides of the Alness River.

Back to Ardross Castle