Back to Ardrossan Canal (The)[edit]

ARDROSSAN CANAL, THE. Scottish, Strathspey (whole time). F Major. Standard tuning (fiddle). AB. "Ardrossan Canal" was composed by Scottish musician, composer, bandleader and music publisher Nathaniel Gow (1763-1831). The Glasgow, Paisley and Ardrossan Canal [1] was a project originally designed to connect industrial interior Scotland with the west coast ports. It was the brainchild of Hugh Montgomerie, 12th Earl of Eglinton, in 1891 (to whom the Gows dedicated their Fourth Collection of Strathspeys & Dances, Edinburgh, 1803), in part to take advantage of his Ayrshire coal fields and his new deep-water port of Ardrossan. Major portions of the canal were completed by 1811, however, the canal was never completed to its terminus (Ardrossan) and was outdated almost from the time it started to function. It was quickly replaced in the service it was created for by railroads, and yielded not a dividend for its investors. Poet Robert Tannahill (who suffered from depressive episodes) drowned himself in a culverted stream under the canal in 1810, after receiving a rejection notice from a publisher. 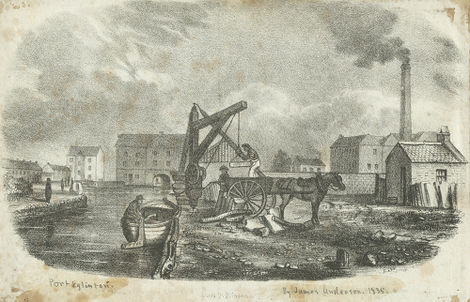 This drawing of 1835 depicts Port Eglinton in Tradeston, the terminus of the Glasgow, Paisley & Ardrossan Canal just west of Eglinton Street near Cumberland Street. Port Eglinton was named after the Earl of Eglinton.

Back to Ardrossan Canal (The)[edit]