Find traditional instrumental music
This is the stable version, checked on 14 September 2022.
Jump to: navigation, search 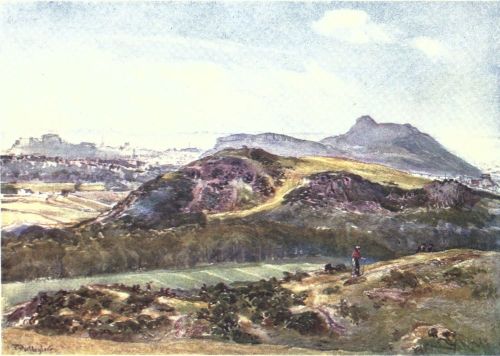 Arthur's Seat from the Braid Hills, c. 1904 by John Fulleylove. To the left are part of Edinburgh, the mass of the Castle, and the shores of Fife. The Salisbury Crags and “Lion” of Arthur’s Seat are above all.

The hornpipe was composed by the famous Scots composer and fiddler J. Scott Skinner, appearing first in his Cairngorm Series (Pt. 6). Arthur' Seat [1] is a prominent Edinburgh landmark, a high volcanic plug. The name is quite ancient, having been first recorded by Giraldus Cambrensis in the 12th century as Cathedra Arturi (the Greek word cathedra means throne), and stems from the time the area was Brittonic, prior to the invasions of the Anglo-Saxon tribes.

Bill Hardie notes that the cross bowing he indicates in his printed version of the tune "is particularly suited to the chromatic writing in the second strain." Skinner himself made a 78 RPM recording of the tune in the early 1920’s as part of “The Celebrated Hornpipes” medley. Skinner had also recorded "Arthur's Seat" in 1910 in London with pianist Ethel Stuart, one of a series of Skinner recordings from that session heard by a young Donegal fiddler John Doherty, and added to his own repertory [1]. See also Irish versions under the title "Fly By Night (1)."