Find traditional instrumental music
This is the stable version, checked on 13 June 2019.
Jump to: navigation, search

AUCHINCRUIVE HOUSE. Scottish, Reel (cut time). G Minor. Standard tuning (fiddle). AA'B. The reel was composed by Hugh Gilmour, who contributed several melodies to James Manson's two mid-19th century Hamilton's Universal Tune Book volumes. Auchincruive House [1] was the name of a country house and estate in South Ayrshire, Scotland, located on the north bank of the River Ayr. It still stands, although is now called Oswald Hall in honor of merchant Richard Oswald, who built the present Auchincruive House in the 1760's. Oswald was a representative for Great Britain during the negotiations that produced the Treaty of Paris ending the American War of Independence in November, 1782. He made his early fortune in the slave trade, erecting a fort on Bance Island on the Sierra Leone River, as his operational headquarters, although subsequently he branched out into world-wide trading opportunities of all kinds. He was criticized by some in Britain for being overly sympathetic to the Americans in his 1782 treaty, but Benjamin Franklin believed him to be a skilled negotiator and described him as a man with an "Air of great Simplicity and Honesty." See also note for "Mrs. Oswald of Auchincruive (1)" for more. 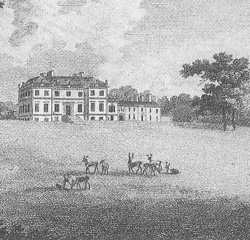