Back to Auchtertyre House 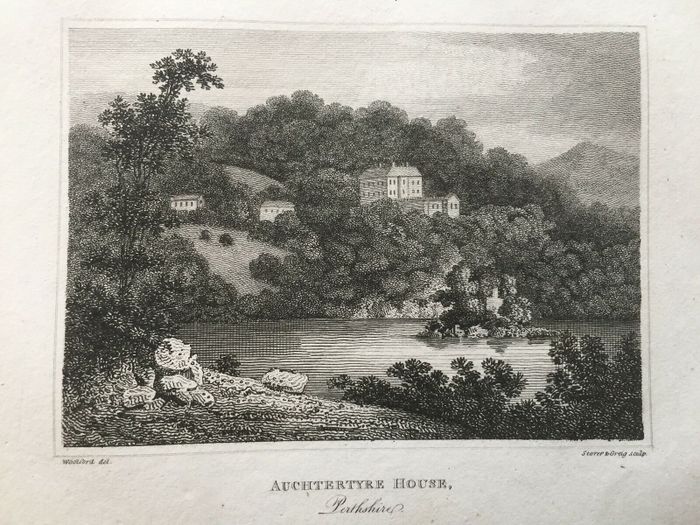 Robert Forsythe's Beauties of Scotland (1808) gives that Auchtertyre House, near Crief, Perthshire, was at the time the seat of Patrick Murray, Bart., MP for the city of Edinburgh. The house was situated on an oak-covered hill with a commanding view, overlooking Loch Moinvard. A rather horrible story is told of the nearby Church of Auchtertyre, which in 1511 was the site of a gruesome murder. The Abbott of Inchaffray, one Walter Murray, was out with a party "riding the bounds" to establish claim to the area for the purpose of claiming the tithes of the parish. The lands were held by the Drummond clan, who found the abbott's actions "insulting and tumultuous," and they rode out to confront the cleric. They were joined in this by one "captain of Dunstaffnage" who was on his own mission to avenge a murder of a Drummond by someone with the name Murry. Thus was the stage set for an inflamitory meeting. Walater Murray read the signs aright when they met and retreated to the little church at Auchtertyre, where he claimed sanctuary. This may have been honored, save that one of the abbott's party took aim from the refuge and shot dead one of Dunsaffnage's men, upon which all claims for sanctuary were voided. The Drummonds took revenge by burning the structure, and all in it.

In 1787 Sir William Murray held the seat at Auchtertyre House, and invited poet Robert Burns and several other guests to stay the autumn as his guests. Burns wrote that he was "exceedingly comfortably situated" there. It was on this visit that he met Euphemia Murray of Auchtertyre, for whom he wrote "Blythe was she."

Back to Auchtertyre House