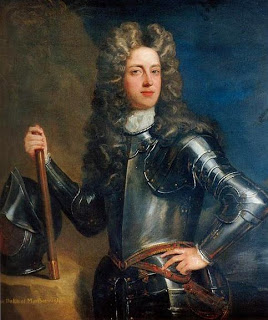 In 1708 an important engagement [1] was fought between British and French forces in the War of the Spanish Succession, resulting in a resounding victory for the former, commanded by the Duke of Marlborough, John Churchill (see also Playford's "Churchill's March). Narcissus Luttrell writes in A Brief Historical Relation of State Affairs (1857)

A general thanksgiving is appointed to be on Thursday, the 19th of August, for our late victory over the French, near Audenard, when her majestie, 'tis said, will goe to St. Pauls, and hear Dr. Fleetwood, bishop of St. Asaph, preach upon that occasion. An officer in our army in Flanders writes, that 'tis in their power to invest which of the enemies towns they please, but have not battering guns nor mortars nearer than Sas van Ghent, from whence 'twill be difficult to get them, so long as the French lye on the canal near Bruges; and that a strong detachment was sent to in large the ways for our marching to Rousselaer to straighten them. Tis said their army is diminish'd at least 20,000 men since the battle.