Find traditional instrumental music
This is the stable version, checked on 9 April 2021.
Jump to: navigation, search

Back to Auld Man's Mare's Dead (The) 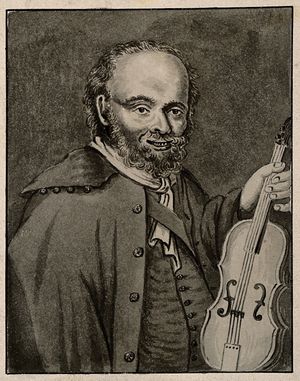 The Famous Fiddler of Kinghorn,
Wha alaid the stick out o'er the string,
With sic an art,
Wha sang sae sweetly to the Spring, ... [Ed.: Spring=tune, melody]
And rais'd the heart.

An 18th century writer described Birnie as having a face that mingled "cleverness, drollery, roguery and impudence," which has certainly been captured in the one portrait of him that still exists (reproduced in Emmerson 1971), painted by William Aikman (1682-1731). For more on Patie, who seems quite a character, see Alburger, pp. 29-30. There are some doubts, however, that the tune we now know by the "Auld Man's Mare's Dead" title was Patie's composition. The only attribution to him is from Alan Ramsay, in his "Elegy on Patie Birnie" dated January 25th, 1721, and the tune itself does not appear until Aird's vol. II (1785), according to John Glen (Early Scottish Melodies, 1900). The song (without music) appears in The Scots Nightingale (1779), where it is attributed to a "Mr. Watts" (by what authority it is not known). James Dick (The Songs of Robert Burns, 1903) concluded Birnie was not the author of the song.

The title appears in Henry Robson's list of popular Northumbrian song and dance tunes, which he wrote c. 1800, and it is song number 485 in J. Johnson's Scots Musical Museum, the notes to which Stenhouse ascribes a date of 1660 to the song (although with what evidence it is not known). Collinson (1966) says the wide intervals (10th and 9th in the sixth and seventh bars) "points clearly to its fiddle origin."

Back to Auld Man's Mare's Dead (The)